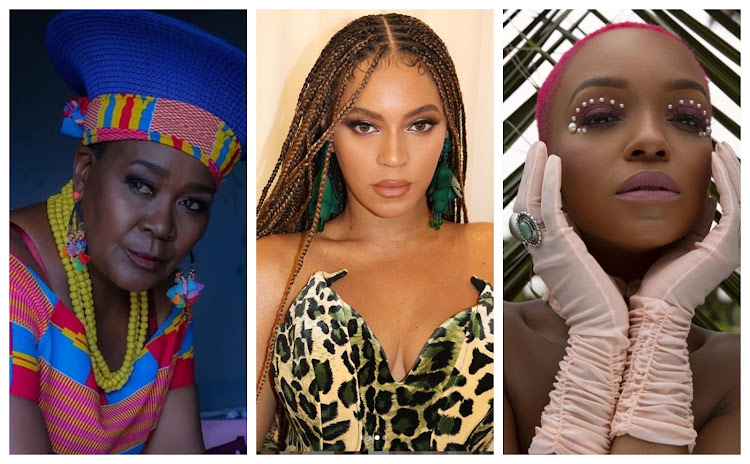 Actress Connie Chiume and TV presenter Nandi Madida star in Beyonce’s ‘Black Is King’.
Image: Instagram/Connie Chiume x Instagram/Beyonce x Instagram/Nandi Madida
For the first time in a long time most Africans agree that an American production came through with the correct representation of black Africans, and it was South African talent that told the bulk of that narrative is the cherry on top!

Black Is King, a film by Beyoncé, finally aired at the weekend and the excitement was almost suffocating. While there was never any doubt that the project would be a marvel to watch, here at home we were waiting to see our very own stars shine.

After weeks of watching snippets and only getting hints of who bagged a role in the visual album, Mzansi was super proud to finally watch Connie Chiume, Nyaniso Dzedze, Moonchild, Busiswa, Nandi Madida, Warren Masemola and Mary Twala in action alongside Bey.

The amount of regal vibes the film gave off was truly unmatched. As per Beyoncé’s hopes, the film told a reimagined story of The Lion King but, unlike the fictitious Wakanda of Black Panther fame, the black excellence shown in this project is real and that is why the film got a thumbs up from most Africans.

Nyaniso and Nandi, who brought to life the characters of the older Simba and Nala, and Warren, who played the villain and channelled his inner Scar, did an amazing job. Actress Nambitha Ben-Mazwi got her chance, looking fine and proud in her blackness.