Post main image
Sello has since comforted the couple, expressing his helplessness in the situation. He claimed that both he and his wife Pearl Maake KaNcube adore them and that they served as an inspiration for their union. “It was your lovely union that led to my marriage! One feels so helpless while watching what’s happening to you guys because it’s so sad. I want you to know that we are concerned for you, that we are aware of how strong your bond is, and that we urge you to never lose sight of what you truly have in common.” He expressed his satisfaction that they are presenting a united front “The fact that you guys support one another inspires hope in many people! 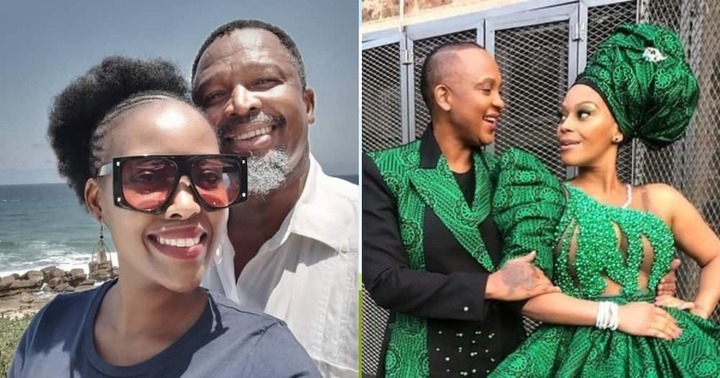 You really knew what they meant when they said “through thick and thin”! I’m sending you guys love on behalf of Pearl Maake KaNcube and I.” Letoya replied by expressing gratitude to the actor for calling them “Ntate Sello, I’m so grateful to you. Feeling helpless is the last thing you should experience. Your wife’s call to us on the phone, together with yours, significantly improved our mood. God bless you and your family, and may He grant you the courage to help us when we’re down.” Following the Daily Sun’s publication, Letoya acknowledged that she and Lebo were in fact attacked by the Leeus. “Yes, what you have all read in today’s Daily Sun is accurate.

Lebo Makhene-Pulumo, my wife, and I were attacked by my ex-husband Tshepo Leeuw and his family when she refused to accept a plastic bag containing five packs of noodles, five apples, five pears, five bananas, and a box of tinkies that he was sending home with my son. “He lies and says he is helping my son, but he isn’t. He actually owes me money because he borrowed money from me. Since our son was born, he has not paid a single cent for him “She spoke. She said in the letter that she takes care of her child and does not require the tiny grocery items the Leeuws sent her because caring for her child costs her R8500 per month. “I spend roughly R8500 per month on my child. Because my wife refused to accept a packet containing 10 slices of processed cheese, 5 noodles, 5 pears, 5 apples, 5 bananas, and not a single penny from these individuals, they severely assaulted her “She composed.

Fans and colleagues of the globally acclaimed actress Nunu Khumalo sent her so many condolences messages. Unfortunately, the actress lost her grandmother. She posted hours ago that her heart is broken.

On the first slide of the video compilation, Nunu holds a microphone for her at an event. She is seated down and having an A4 page reading a prepared speech. The second slide shows an image of her grandparents together with their grandchildren.

Condolences messages flood in for Scandal actress Nunu Khumalo who plays Hlengiwe
In the third picture, Nunu is hugging her grandmother, and she looks the happiest we’ve ever seen. More photos appeared in the photo compilation video of Nunu and her late queen.

A picture indeed says a thousand words. From the words the Scandal actress penned about her grandmother to the image, their bond was watertight. For the actress, her family and home are authentic places for her to be truly happy. Everyone knows the grandmother usually loves the grandchildren more than her children.

Nunu Khumalo
Nunu Khumalo: Image source @Instagram
Comments on the video
Former Scandal actor Kagiso Yabakwena expressed his deepest condolences. He had met the grandmother before and described her as a fantastic soul. Her fans sent their condolences. Her comment section contains broken doves and white heart emojis

South African actor Putla Sehlapelo is best known to SABC1 viewers for his leading roles as Maloro in the miniseries Death of a Queen and as Alfred Magongwa in Skeem Saam.

In the early 2000s, Putla Sehlapelo made his acting debut. Nearly 20 years later, viewers all over South Africa continue to be captivated by his art. His success in the entertainment business has been made possible by his exceptional talent.

Putla is best known to fans of soap operas as Shoki Sebotsane’s on-screen husband. The two have played husband-wife roles on Skeem Saam as Celia and Magongwa and also as Grace and Maloro on Death of a Queen.

In real life, the charming Skeem Saam actor is a kind and devoted father. Neo is his wife, and together they have three stunning children. The actor is reluctant to share too much information about his family.

Putla made his significant acting debut in 2003 when he was chosen to play Spike on the television drama series Generations. Since then, he has made a name for himself in the South African entertainment sector thanks to his extraordinary talent.

The Skeem Saam actor reportedly has a net worth of $200,000, according to Savanna News. Acting success has allowed him to accumulate his wealth. Putla Sehlapelo has been a regular on Mzansi screens for almost 20 years and continues to be one of the most adored actors in the nation. His talent is still a great point of comparison for aspiring actors and actresses who want to succeed in the cutthroat business

Following the horrible incident that took the lives of 22 celebrating students at Enyobeni Tavern, Eastern Cape. Many rumours have been flying on the air on what might be the actual cause of the massive death in one night.

It happens that most of the deceased students were under aged which amount to more blames towards the parents of the children and the bar owner. However, some peple believed that they might have suffocated due to overcrowd, while others believe that there might be more behind the tragedy that is yet to uncover.

Moreover, the children were ignorant enough to have jam-packed themselves in the pub. From the video trending online, there are upto thousand children celebrating in the pub. However, some forensic investigations have showed that there was no or little brutal bruises on their body.

According to sources, these are pictures from Enyobeni Pub social media page showing the event before 22 kids lost their lives. The place was like an immoral arena for kids to learn how to drink, smoke and fornicate.

Meanwhile, the Eastern Cape Province Liquor Board has revoked a tavern owner’s liquor license and has vowed to open a criminal case after at least 21 young people were found dead on Sunday morning.

What do you think might be the cause of deaths? Do you think they might be poisoned or stampede erupted in the pub? Kindly say your thoughts in the comment section and don’t forget to follow me for more interesting updates.

Many players find themselves struggling to make ends meet but not former Jomo Cosmos players Thabani Bhengu who is a very large scale farmer who is running an agriculture establishment called Ndlela Farming.

Bhengu was intrigued by agriculture at a very young age, but farmers’ boots weren’t the first pair of shoes he strapped on. In a former life, he was a rising star in the Jozi-based Jomo Cosmos football club.

Bhengu has a number of workers in his farm where he is also busy with livestock and not only vegatable farming, being such an inspiration and a man of wisdom to switch careers comfortably and still make a good living.

Thank you for taking your time to read this article and please feel free to leave a comment, don’t be scared to comment because the KASISOURCE is here to engage with the people in the Opera Kasi. Also press the FOLLOW button so you can always know what the KASISOURCE has for you everyday