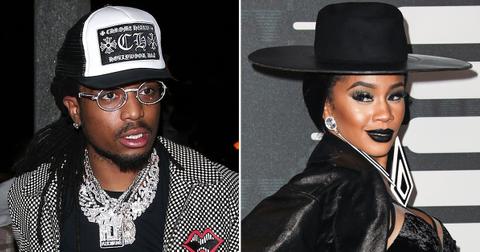 he internet was set ablaze yesterday after TMZ dropped video footage of Saweetie and Quavo having an altercation in an elevator that reportedly happened last year. They just broke up two weeks ago, after a whirlwind interview with Justin LaBoy and Justin Combs (and rumours of a physical altercation between LaBoy and Migos afterwards this past Monday in Atlanta). Here’s how Saweetie announced the split:which is rich for a man we were forced to acknowledge because of her career, in a rap group with another man who we acknowledge because of his wife’s career (Offset/ Cardi B). I’m not saying The Migos is irrelevant, I’m saying their careers have benefited greatly from being propped up by the success of two women more famous than they are. I’m saying I haven’t heard a single that’s excited me in four years. I haven’t heard anything that sounds like Fight Night in over six years.

To go back to the breakup, some people were shocked a woman as beautiful, confident, talented, famous, and rich as Saweetie could get cheated on, plus we were rooting for them, especially after the beautiful spread they did for GQ last July. But sadly we are old enough to remember what happened to Beyoncé.

Other people were up in arms about past comments Saweetie made about threesomes with Quavo during Respecfully Justin, but I thought this stood out in the interview as the best part:

“First of all ladies, don’t ever be scared to ask for no money…we’re women and we got coochie. Second of all, respectfully, you always gotta be cute about it though…like babe I need some groceries, I wanna go shopping, you got to set it up nice and cute.”

Then Justin Combs (wearing the most beautiful chain I’ve ever seen in my life) asks if women should take their men shopping or spoil them. I mean, I just can’t. Anyway, Saweetie said this:

“Why do boyfriends wanna be treated like girlfriends? Let me just clarify something. Men deserve to be spoiled, right? So men want you to give up the coochie, they want you to have the babies, but then they also want you to match his bag. That requires working all day, that requires hustling the same way…and you wanna be spoiled on top of that? Let’s be realistic though, it’s cool to spoil your man, but c’mon we deserve to be spoiled 24/7 because of what we can offer.”

The binary that Saweetie’s drawing between boyfriends and girlfriends is very cis-normative and I don’t like it. But what she is saying about what we have to offer if we choose to partner with men is true. What exactly do men have to offer, when a lot of the time we make more money, we have children, we deal with maternity leave and our careers being derailed, we often increase a man’s social status (and in Saweetie’s case, just like Beyoncé, JLo, Britney Spears, Whitney Houston, etc their visibility), and what do we get? A man to call a husband? It’s like capitalism, it’s not cool anymore. A lot of us want more and we absolutely should be spoiled for buying into such an archaic institution such as marriage, especially if it comes with rigid rules like monogamy attached to it (in my opinion…#respectfully).

People dragged Saweetie for this opinion because they were still mad that she declared that women deserve Birkin bags. But when Drake creepily admitted to already buying his extensive and exclusive Birkin collection for a woman whose taste he doesn’t know yet, he was praised. We can’t hold women in hip-hop to a higher standard than men when they are competing with men now in terms of numbers and audience. Nicki Minaj is not only the best female rapper of all time, but her competition is men. That’s why she killed Jay-Z, Kanye, and Rick Ross on the Monster verse a month before her first album dropped. That is where we are in hip-hop.

But in so many ways, we are behind…and we know how dark and misogynist the industry is. When Dr. Dre had a brain aneurysm in January, and people didn’t know if he was going to be ok, Dee Barnes was again being erased. He is living on borrowed time in terms of his accountability for abusing her in public and ruining her career. And this is after we know what his first wife Michel’le said about how abusive he was. Then there’s the way men online are accusing Nicole Young, his estranged wife of 20 years of taking his money…when it’s her money! Everything she is entitled to is her money, and allegations of him abusing her have been leaking for the past year. I also want to point out that Nicole Young is a lawyer, something people like to forget. I’m tired of people telling women to get a job when their marriage and life implodes. If he didn’t have or ripped up the prenuptial agreement (according to rumours) whatever she is entitled to is the law.

I’m single. I’ve endured too much betrayal and hurt behind the scenes for a false narrative to be circulating that degrades my character. Presents don’t band aid scars and the love isn’t real when the intimacy is given to other women.

I encourage anyone who hasn’t to check out the HBO documentary on the story, which isn’t as widely available as I’d like it to be in Canada.

And then of course there was what happened to Megan Thee Stallion after Torey Lanez shot her, as if that wasn’t enough …that he shot her!

So now we have to reckon with the fact that there may have been violence in Quavo and Saweetie’s relationship. In the video, he shoves her to the ground and does not offer assistance. And how do some people react? By blaming her. It is so difficult to see a Black woman with a public profile treated like this in three ways: it shows what people themselves do or tolerate, or what kind of support they would offer a loved one, and the human cost of domestic violence. This is why women underreport violence: they are not believed. This is why they don’t tell their family and friends. Not being believed is an epidemic among women, especially Black women, ranging from violence to medical care. I’m often not believed by Black men and women in my own profession if I speak out against a man about his professional work. So what about Black women in the legal profession who are subject to sexual harassment or worse? People need to take responsibility for how their attitudes create unnecessary burdens in other people’s lives. And when they side with Quavo, they are adding to the systems that enable abuse and violence. As Black people, a lot of us aren’t interested in the ridiculous ways in which we were encouraged to be silenced. As a Black woman of Caribbean descent, I am truly embarrassed by the standards that our culture perpetuates against Black women that endorse abuse, incest, homophobia, and violence. We still have relatives walking around who are alive that can’t stand the sight of Lil Nas X living his truth! I literally am related to people who wake up in the morning to be mad that he and Zaya Wade are being themselves – it’s miserable and embarrassing. And this kind of behaviour and belief system can ruin a child’s entire life. I am so proud that Gen Z kids aren’t holding and minimizing secrets the way Gen X taught us to and millennials are now starting to unpack. We aren’t going backwards. We actually want our people to thrive, and at least live.

With all the noise blaming Saweetie for the situation, social media has also provided a beautiful space for Black men and women to express their standards in healthy relationships, and the fact that it does not include violence. I hope Saweetie has the support she needs and Quavo gets some help.