TMZ has obtained footage of a physical altercation between the former couple at an apartment complex in North Hollywood. The footage shows both of saweetie and quavo standing outside an open elevator. When the door opens, Saweetie is swinging on Quavo. Quavo dodges the hit dropping the orange Call of Duty case.Saweetie tries to up the case.There’s a struggle over the case before Quavo pulls Saweetie down to the ground.

Quavo heads up with case on his hands.Saweetie remains on the elevator floor as Quavo looks at her but doesn’t help her up.

At one point, quavo even notices the surveillance camera.

The elevator opens in another floor.Quavo walks off with bag and puts the bag on the elevator door to keep it from closing.

Saweetie picks up herself and limps off. 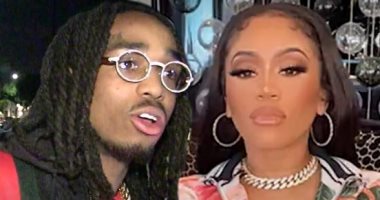