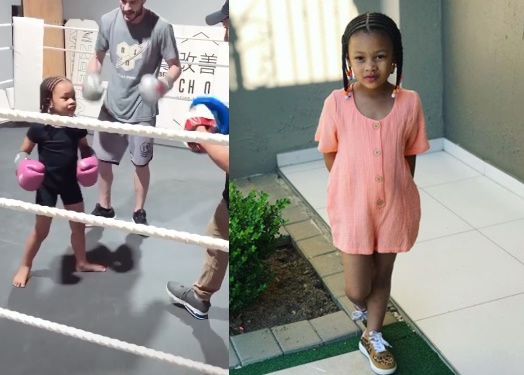 In a video shared on the young girl’s Instagram story, she’s seen learning and practicing how to box for the purpose of self defense.

Remember that her father, AKA loves to box and he’s got a boxing match against Cassper Nyovest.

The match is one of the most anticipated event in the history of hip hop culture.

It is believed that the two rappers will end their beef in the ring.

However, Supa Mega recently said that whoever loses at the match should shut the fvck up for life. He also added that he is confident to win the match.

Cassper is also interested in hurting him and has also learnt strategy to beat up his opponent in the forthcoming boxing match, scheduled to hold in May, 2021. 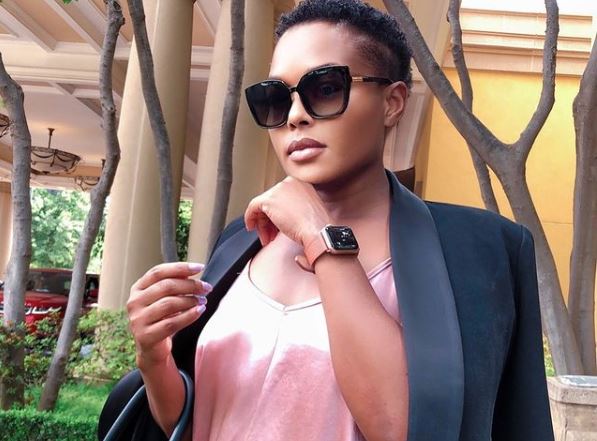 In the midst of living her best life, she desires to irritate some woman’s son.

Ann wasn’t so clear on whose son, but she explained further, that she want to trigger a fight with a man.

“I act like I’m fine. But deep down inside me I wish I can irritate some woman’s Son. Start a fight or something😏 kuphithizele nje,” she captioned post shared on Instagram.

Most of her followers laughed it off.

“In my head I’m a model🤞🏼Also get you a Man who is good behind the lenses,” she captioned a bikini snap shared on social media. The Fergusons have cemented their names as giants in the entertainment industry. Every time you hear their collective alias, ‘power couple’ instantly comes to mind. They are both actors and have used their talents to create an empire. They launched their production company, Ferguson Films. The company has produced multiple hit series for Mzansi Magic, which includes Rockville, iGazi, The Gift, The Throne, The Herd, The Queen, and The Imposter.

It was definitely written in the stars as their love still inspires 19 years later. The power couple has been married for almost two decades and they are still going strong. The couple made things official in 2001 and their daughter Alicia came thereafter. Together they raised Connie’s daughter from her first marriage together. The couple renewed their vows in a star-studded ceremony in 2011.

Fans on Facebook expressed what they love about them and their responses were amazing.

It seems as though people agree that their union is most inspiring as it is one of the most important elements in a relationship. The nation is still in disbelief following the untimely passing of 37-year-old Kwaito artist Mshoza. Tributes have been pouring in for the hitmaker through social media from her fans and friends in the music and television industry.

You Promised To Marry Me presenter and rapper Jub Jub has expressed his grief and disbelief on social media.Mshoza’s management company, Kwathole Conexion released a statement revealing that the star died after suffering a short illness. She passed away in the early hours of this mourning.It is with great sadness to announce the untimely death of Nomasonto

“Mshoza’ Maswanganyi. The Kortez hitmaker succumbed peacefully in the early hours of this morning. She was 37.

She will be deeply missed as an ultimate entertainer who loved being on stage. Not only did she radiate star quality, Mshoza was a media darling.

The Kwaito star’s close friend Khanyi Mbau broke the news of Mshoza’s passing. Posting, “REST IN PEACE MY LOVE . I am tired 2020,” wrote Khanyi. Several reports suggest that the star, who was reportedly diabetic passed away at a Johannesburg hospital after contracting Covid19.

I_Am_Bucie Tweeted,The world underrated her, body shamed her, called her names but through it all she won, conquered and inspired many. The godmother of KWAITO, the Queen. of KWAITO, Long Live Mshoza” Reality show star and musician Andile Mpisane, must be on cloud 9 after he recently welcomed his baby girl into the world and he is already showering her with gifts shuu, money talks right?

His baby mama Durban based DJ Sithelo Shozi took to her Instagram stories to show off a personalized Louis Vuitton handbag Andile purchased for their toddler. Sithelo captioned the video “Arg Daddy is the sweetest. Princess has been long overdue for her first handbag.”

It seems the newborn even has a Fendi blanket. Her mom revealed that gold is her favorite color and we are not surprised because her dad Clearly, Andile is sparing no expense when it comes to spoiling his baby girl, and he recently copped himself a pricey Lamborghini Urus that costs R5 million.

Sithelo has been sharing some videos of princess Flo and of course choosing not to reveal her face because sometimes celebrity kids are a target of fake social media accounts using their names and pictures.

The DJ recently gave birth to her bundle of joy and showed her off on social media after being hush hush about her pregnancy. The lovebirds have been rumored to be an item for the longest time but they have been keeping their relationship under wraps as they want no public intervention.

According to Sunday World sources, Andile’s mother Shauwn Mkhize, was not happy about her son’s relationship with the DJ at first and allegedly accused her of planning the pregnancy to be a part of the wealthy family. Speaking to the Sunday publication Shauwn said she was not aware that she had a granddaughter coming.

“Woow! I don’t know anything about Andile’s girlfriends. I can’t believe that Andile can hide something so big from me. We are very open to each other but I can’t be telling him who he must date and who he must not. Andile is still young and I can’t involve myself in his private affairs.”

Now it seems there is no bad energy between them. This follows after Sithelo was recently spotted at a yacht trip, organized by the Mpisane family where Somizi was also present and after that event, Shauwn apparently