YouTuber Lasizwe Dambuza’s good deed hit a bump in the road after he posted proof of it which divided tweeps.

On Tuesday, the “Lasizwe: Fake It Till You Make It” reached out to his fans in these uncertain times and asked those in need to send their electricity meter numbers.

Following this, Lasizwe posted a screenshot of the R100 electricity voucher he sent including the caption: “To everyone I bought electricity for, Please use it wisely.”

The coronavirus pandemic has heightened uncertainty over finances, relationships and employment among others.

As a result, many people have developed feelings of anxiety and fear. That being said many people find refuge in music as a way to relax and relieve the stress.

In a bid to encourage fellow South Africans during these difficult times, local musician and tradition healer Letoya Makhene is spreading the message of hope and healing through her new song, “Ngihawukele” which loosely translated means “Forgiveness or Pardon.”

Taking to her Instagram page, the former “Generations: The Legacy” star shares the powerful message to the nation, she wrote: “ This song is about healing…To every South African that is feeling hopeless, discouraged or helpless…this song is for you. God and the ancestors are watching over us and we shall all overcome. Love & Light “Ngihawukele” is a common chorus among izangoma or traditional healers. Seemingly, the song has received a warm reception, judging by the messages on Makhene’s timeline.

Another user, Jamani Khanyisile commented :”Wow nice song sisi #ThokozaGogo. I love that u are proud of being Makhosi . Heal us sisi we are here to Support u.”

“Thank you…a much needed massage, ” added another Instagram user who goes by the name Angel Shelembe.

Listen to the song below:

Vuzu, National Geographic and FoxLife and a host of other channels have made it possible for viewers to tune in to the “One World: Together At Home” Global Special.

The historic, first-of-its kind global broadcast will see performances and appearances by some of the world’s leading artists performing at home.

Launched by international advocacy organization Global Citizen, and the World Health Organization, “One World: Together At Home” will show unity among all people who are affected by Covid-19 and will also celebrate and support brave healthcare workers doing life-saving work on the front lines.

The concert will also feature real experiences from doctors, nurses and families around the world. 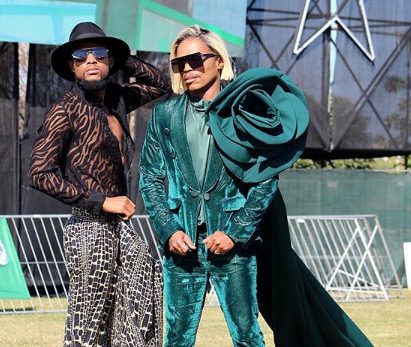 The star shared photo on social media, hoping he nailed it better than the others.

Som’s “gaga” was expressed in the challenge as he rocked a fur head gear.Radio personality, Somizi joins the Pillow Case challenge.

The star shared photo on social media, hoping he nailed it better than the others.

Som’s “gaga” was expressed in the challenge as he rocked a fur head gear.

Mzansi Magic’s new riches to rags hit telenovela “Gomora” has kept fans glued to their screens since its debut a few weeks ago.

Then there’s Teddy’s mom Zodwa, played by seasoned actress Sana Mchunu, who has captivated Mzansi with her unique acting abilities.

Zodwa is an alcoholic single mother, who is battling her own demons and in the midst of all her troubles, Melusi (Zolisa Xaluva) and his wife Gladys (Thembi Seete) takes her son Teddy, in the effort to rescue him from his mother but Zodwa would hear none of that

Then there’s Teddy’s mom Zodwa, played by seasoned actress Sana Mchunu, who has captivated Mzansi with her unique acting abilities.

On several occasion, in her drunken stupor, Zodwa would visit Teddy at school, bearing cute presents like flowers and a teddy bear.

But it’s her killer lines that made Mzansi fall in love with her.

In a scene on the latest episode of “Gomor::a, during a confrontation with Gladys and Melusi, who Zodwa accused of stealing her son, she’s heard saying: “I know that I’m not perfect but for the fact that I birth it, I make it, I born it, I grew it and you take it.”