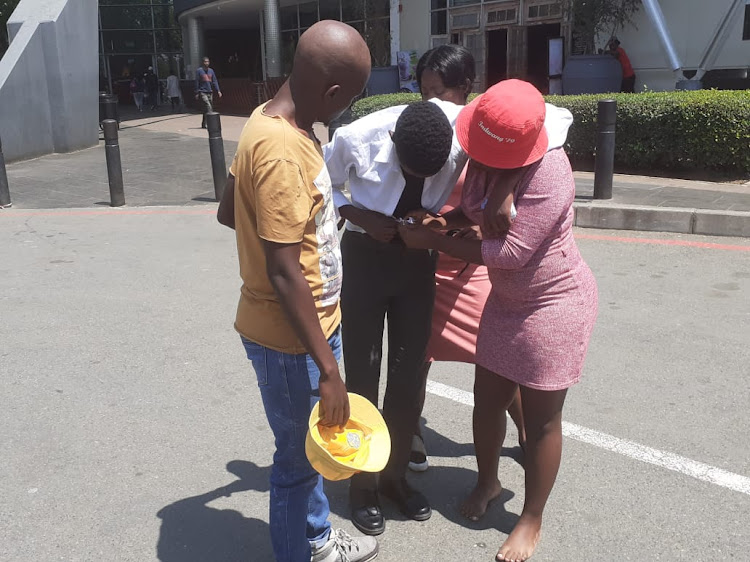 An emotional reunion between mother and son after the boy was found at Maponya Mall in Soweto.
Image: Noxolo Majavu/TimesLIVE
The Johannesburg pupil who was allegedly kidnapped outside his school two days ago has been found.

TimesLIVE is on the scene with the family of the 14-year-old boy at Maponya Mall in Soweto, where the boy was found.

The parents of the Queens High School pupil had received a phone call earlier on Wednesday at their Meadowlands home, telling them to rush to the nearby mall.

The parents along with other family members were reunited with the pupil behind closed doors in the mall’s security control room.

After a few minutes they emerged with the missing boy, his siblings supporting him on either side.

Still dressed in his school uniform, the boy was warmly embraced by his grandmother, who had been waiting outside the control room. The elderly woman cried and shouted praises to God as she held her grandson.

As the child came out of the control room, he too broke down in tears.

His emotional father cried out, expressing gratitude that his son had been found alive.

The grade 8 pupil was allegedly abducted on Monday while waiting for transport at the gate of the school, east of Johannesburg, the Gauteng education department said earlier.

The pupil’s family says a ransom of R500,000 was demanded. Earlier reports had stated that the amount was R5m.

“Subsequently, it is alleged that a ransom … had been demanded for his release,” said department spokesperson Steve Mabona. Police were alerted and began investigations.