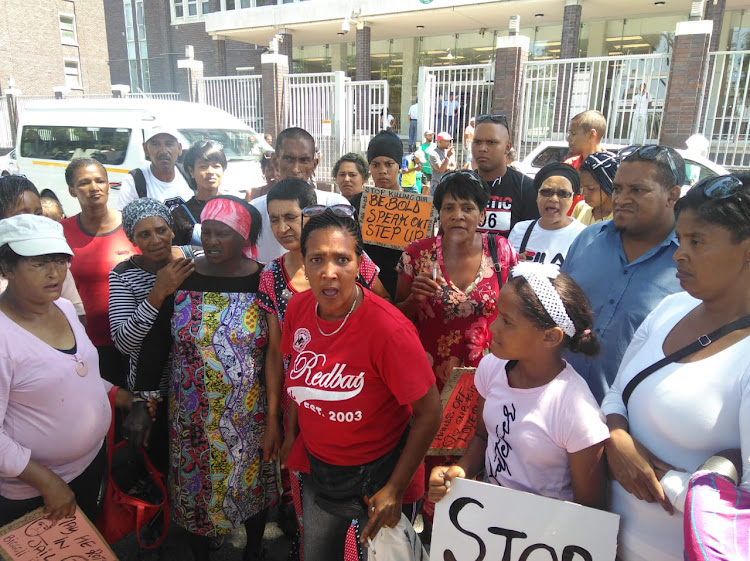 Angry community members demanded retribution on Monday outside a court where a man accused of raping and murdering a 12-year-old girl in Cape Town appeared.

Many called for the return of the death penalty after discovering that the man had been released on parole after serving part of a 20-year sentence for rape, before he allegedly attacked Michaela Williams.

The Wynberg magistrate’s court heard that the 48-year-old man, who cannot yet be identified, was released on parole in 2018.

He lived in the same neighbourhood as his alleged victim’s family.Western Cape police said in a statement on Thursday that Michaela’s mother reported her missing on January 8, after which a search got under way.

“Vital information was followed as part of the investigation and the suspect [was] interviewed. The interview led to him pointing out where the body was. The suspect has subsequently been charged with murder,” said the police.

“A postmortem will soon be conducted to determine how she died and whether more charges could be added.”

According to the charge sheet, the suspect is being charged with rape and murder.

Before the hearing started, Michaela’s mother Beatrice Adams burst into tears in the gallery.

The suspect, wearing glasses, a yellow T-shirt and tracksuit pants, was not asked to plead. He stared straight ahead during the brief hearing.Prosecutor Nicky Konisi told magistrate Goolam Bawa that the state would oppose bail and asked for a lengthy postponement. She said postmortem results and statements were still outstanding.

“I would like to ask the court to bar the media and the public from publishing the name [and picture] of the accused until further notice. It is still early in the investigation,” said Konisi.

Bawa granted her the request. “The court is going to order that the identity of the accused [not be revealed] in any manner,” he said.

“Members of the media and the public are ordered not to publish his name or his picture. The members of the public, if you post pictures of the accused on Facebook, you may be charged.”

Police had their hands full removing throngs of angry people who could not find seats in court. “This case is sensitive and emotions run high. If you came to listen, please do that – listen. If we can’t control ourselves, it means we are part of the problem,” said Bawa.

Speaking through his lawyer Kyle Jason, the suspect said he did not intend applying for bail.

The matter was postponed until April 14.

“The death penalty must be brought back,” said activist Shariefa Daniels outside court.

“I feel very, very sad. This man was out on parole on a rape case. Had the authorities told us about it, we could have warned our children about him.

“The justice system has failed us.”

Community members demonstrate outside the Wynberg magistrate’s court as the alleged child killer appeared inside.